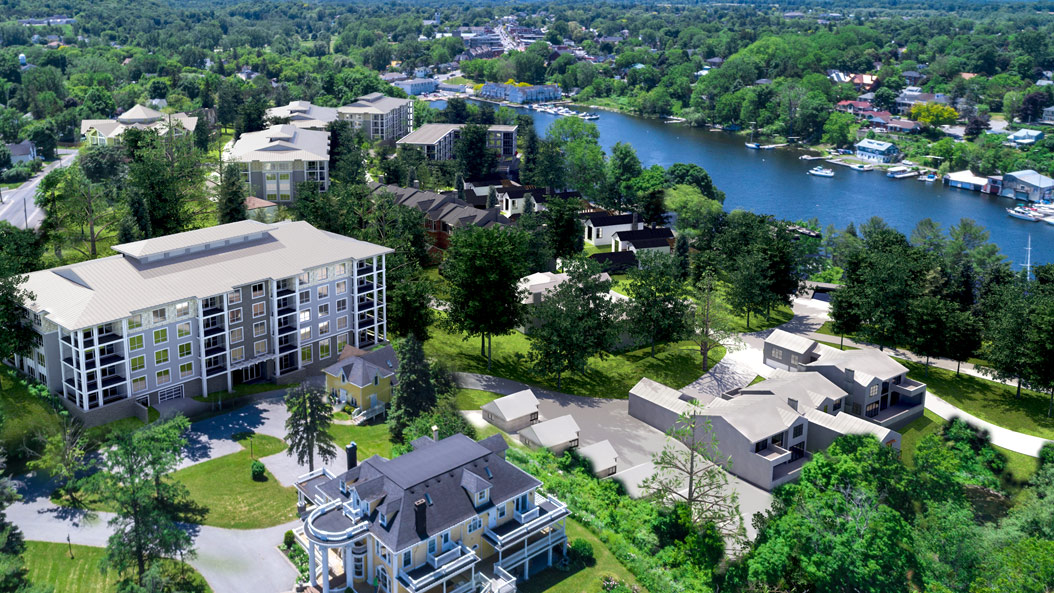 A proposed subdivision came before a public planning meeting last Thursday evening. Port Picton Homes, owned by local builder David Cleave, is hoping to start a six-phase project, which at full buildout will see 311 housing units. The application was submitted in May.

Matt Coffey, Planning Coordinator with the County, presented the report to council. He explained that there had been a vision to develop for quite some time, citing a report from 1980. “Even at that time there were areas on this site that had been considered for higher level development,” said Coffey. The project would see a series of blocks throughout the property, featuring single family homes along Picton Harbour, townhomes along roadways and a four-storey condominium. It will also see semi-detached units and condominiums along Bridge Street.

The subdivision would be rolled out in six phases. The first phase encompasses the former Claramount Inn property, which will be restored to host dining, amenities and accommodations, including 18 guest units, the building of 17 single detached homes, four semi-detached homes, 16 townhomes and a 22-unit midrise building. Phase two is set to see five more midrise condominiums featuring 195 units and one mid-rise mixed use building on the waterfront.

The building at 106 Bridge Street is also part of the project. It will be renovated to provide support to the Claramount Inn by offering employee housing and additional parking, as well as possible garbage and maintenance equipment storage.

Jennifer Wood, land use planner with Fotenn Planning + Design explained that the scope of the project has changed quite frequently. “This is a substantial project,” said Wood. “The plan for the site has been evolving for quite some time now. We hosted a couple of open houses during the wintertime and we’ve made some changes to the plan even since it was submitted in May.”

The lands would be in private ownership, but public access would still be allowed, and encouraged. “We are proposing a full public easement over the entirety of the condo road,” said Wood. “These are meant to be private roads, not a private community. There aren’t going to be gates. It is to be a fully permeable neighbourhood and we think that is what will make it successful.”

Councillor Mike Harper asked how that crossover would work “To some degree it feels like a private community, yet the public has access to it. Is there any precedent that you can draw from to say the extent to which the owners and public can exist peacefully together?” asked Harper. Wood explained that by having the lands deemed as private, it eliminates some of the requirements for roadways. “I would say that the private ownership component is largely, if not wholly, administrative,” said Wood. “It is not meant to be a private community. A condominium road is simply to allow a road format and design that doesn’t meet municipal standards. If we were to construct a road that the County would assume, it has to meet certain design standards.”

The mixed-use midrise building, slated for construction in phase two, would see the upper levels used as residential and the ground floor see commercial uses that draw people to the harbour allowing interaction with the park space. Intitial ideas are a café, restaurant and seasonal rentals for the waterfront such as kayaks and ice skates. “Ultimately, we want to provide the highest quality architecture and design that is feasable, featuring high quality and sustainable building materials,” said Wood. “We are also exploring having some roadways as interlock, and sharing common elements throughout the landscape blocks.”

A series of waterfront trails and parks throughout the property would be open for public use. “We also wanted to make the waterfront an animated destination by providing year-round access and amenities, so what we have provided is a series of interconnected parks along the waterfront,” said Wood. The roadways in the development would also offer and promote cycling, pedestrian and vehicle traffic.

Parking, as usual, was a hot topic issue. The development plans to keep all parking on site. The midrise units will have underground parking, providing 1.25 spaces per unit. There will also be street parking for visitors. “We want the needs of parking to be met on site, and not spillover into the neighbourhood,” explained Wood.

Councillor Phil St. Jean asked about the exiting trees on the property, and whether the plan was to keep those or plant new trees, which would take years to mature. Woods acknowledged that trees were an important component to the development. “A prime objective of the project is to retain as many trees as possible. Trees will be lost. The intent is to retain as many as possible, and to integrate a significant amount of new plantings,” said Wood.

Councillor Stewart Bailey was concerned about the attainability of the units being built. Bailey questioned whether any of the housing would be classed as affordable. Coffey explained that the issue is also a worry, and challenge for staff. “There are a variety of residential typologies being presented here. Certainly single family homes on the waterfront might not be considered affordable. Units in a condo building perhaps could be affordable. It is something that we are considering, and obviously we need to meet that intent of the Official Plan. It is a bit of a challenge with this site because it is high end development and the affordability aspect may be a challenge to meet,” he said. Woods told council that although a full marketing plan had not yet been complete, there was a starting figure in mind. “I can say that some of the smaller condo units are to start at $340,000 and would go up from there,” said Wood. “We are catering to any and all household types We are offering residential types, scales and sizes that can accommodate anywhere from one-person households to fiveperson households.” Bill Roberts agreed with his fellow councillor “The affordable or attainable housing issue is not going to go away. We have a secondary plan that calls for a target of 30 per cent of new housing being affordable. It’s an issue that needs to be dealt with,” added Roberts.

The project does suggets a higher density than is permitted through the Secondary Plan, but Woods is hoping to clear that hurdle through a provision called density bonusing for community benefits. First, the development needs to be determined to be compatible, and then the official plan sets out 10 potential gives that a developer could provide as community benefits. These are things such as parkland dedication beyond the requirements, public areas and connections, public parking provided with park blocks and waterfront improvements, all of which this project would provide.

Port Picton Homes owner David Cleave was pleased with the outcome of the planning meeting. “It was an exceptional evening,” says Cleave. “There were good questions from the immediate neighbours and an equal amount from some of the councillors. What was most notable by the end of the question period, was that a great deal of the public and council’s concerns were answered by Jennifer. The key to great development is having a team that turns over every rock and anticipates the questions and concerns long before they ever get to a public meeting,” he added.

Cleave said hosting open houses and engaging the public was an important step to the process. “Due to the size and complexity of this $200 million project, we hosted two public meetings in January and February 2019. These were well attended evenings (standing room only) which proved paramount in addressing most public concerns early in the planning process. We took good notes, and then modified the plan based on the initial feedback. Additionally, I met individually with the majority of County councillors at our offices,” said Cleave.

Cleave and his team will work quickly to address the concerns that came from the meeting, in order to satisfy planning requirements. Draft plan approval is schedule for September 18 . The sales centre will open later in September, and Cleave is not expecting any issues regarding sales, as Port Picton has already amassed 100 purchasers on the reserve list, just from word of mouth. Ultimately, Cleave is excited to get to work, developing the property “This is certainly a special piece of property and one that our family is incredibly excited for the rest of the County to enjoy.”