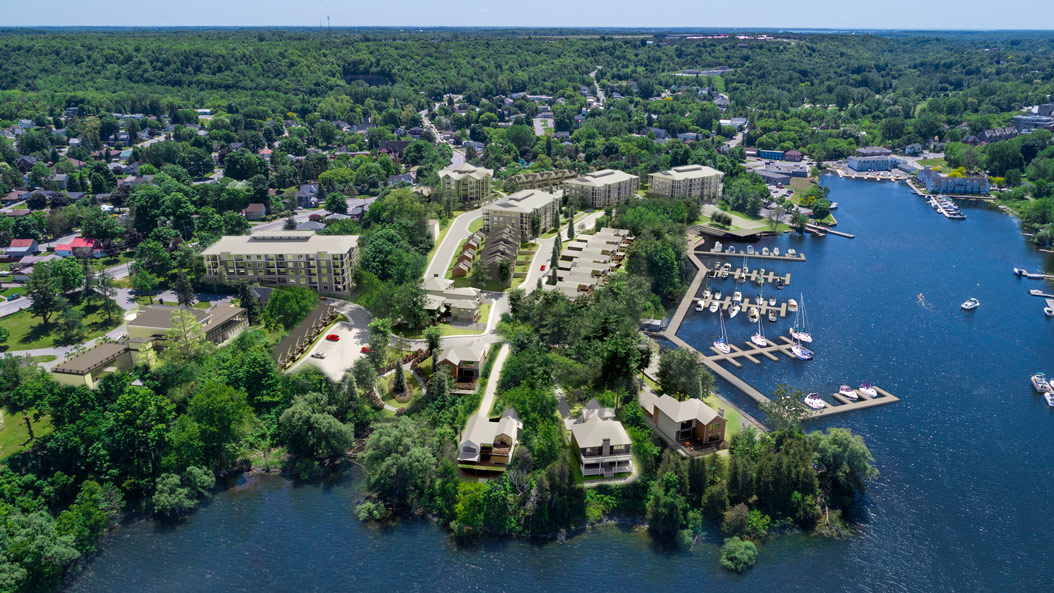 The public will soon have the opportunity to view in further detail a three dimensional model and artistic renderings of a $160 million development that will transform the southern shoreline and acreage east of the Picton Harbour municipal boat launch.

Entitled a Master Plan Community on Picton Harbour, the sessions include a presentation and question and answer period and will take place Jan. 24 at the Picton Town Hall and on Feb. 7 at the Prince Edward Community Centre.

Both sessions start at 7 p.m.

Port Picton Homes’ David Cleave admitted the project is ambitious but when compared to other Lake Ontario communities with harbours that are of similar size, the Port Picton project development was something that is long overdue.

“It’s an ambitious project and it’s a top loaded value at $160 million in today’s dollars but it’s being done in phases that are driven in sales,” Cleave told the Gazette. “Prince Edward County is certainly in need of housing from A to Z and Port Picton Homes been able to offer a number of options at all points in the housing spectrum.”

Port Picton Homes is the company behind the newer Pineridge and Curtis Street subdivisions as well as Macaulay Village and Rosemary Lane.

“Port Picton will move our harbour to where it should be,” Cleave said, pointing to communities such as Cobourg where water view condominiums have transformed a stagnant harbour front into a hub of activity. “This should be a game changer and we will start to see Gananoque, Kingston and Toronto Island type big boat traffic.The boats will start to coming here if we have the proper docking, accommodations and restaurants.”

The entire property which is about 24 acres in size and features 1,700 ft of water front will be, once completed, site of about 14 single family homes along the water’s edge, about two dozen semi-detached and town house as as well as many as six mid-rise, five story buildings which will bring about 280 or so dwellings to the heart of the property

Cleave said the town houses and and single dwellings will be freehold with a condominium common element in the network of laneways, parklands and parkettes.

The main entrance will be stationed at Church st. With an additional entrance at the Claremont property which will serve as a community club house and be the epicentre of the project.

“The key is that this is not a gated or closed community,” Cleave explained. “The boardwalk at the waterfront will be open to the public as will be the parklands. We are inviting people to share this property as a community for many activities whether it’s walking or biking.”

The historic Claremont will serve as an epicentre for health and wellness concerns as well as spa services, a tennis court and pool, a pair of restaurants that include a pub and a mid-level eatery.

In terms of overnight accommodations, there will be series of cabins built adjacent to the property.

In addition to the housing and accommodations, a commercial entity will be placed at the cove near the municipal boat launch that Cleave predicts will be primarily convenience based but also feature cafe and market services as well as serve ancillary boating needs and will be tied to the publicly accessed board walk and parklands.

Port Picton homes hope to have a draft submission before the County of Prince Edward by the end of the month with approval by the municipality some time during the summer.

Ground breaking would commence this fall.

“It’s a lofty goal but we feel we have a great relationship with the municipality and have shown the discipline with regards to out other projects that we can meet those timelines,” he added.

The development would commence at the eastern portion of the acreage and move westerly.

All told, Cleave could see the development fully phased in within seven or eight years.

The property is heavily treed and Port Picton Homes have undertaken an arborist study and inventory of nearly 450 trees.

Cleave said there are over 100 dead standing or post mature trees ready to be removed and another 100 premature saplings that aren’t worthy of staying value.

“When you look at the laneway network, you can see we’ve had them sweep and move to avoid coming too close to many of the mature maple, black walnut and butternuts that are on the property,” Cleave added “We are very cognizant of the trees that are here and standing and that’s why a laneway works because we cut down on the width of the roadway and ensure we aren’t cutting into root to meet the width specifications.”

A family operation, David Cleave’s daughters Elyse and Kathryn have been involved in the early planning and are excited about the potential of Port Picton and what it means to Picton and Prince Edward County.

“The Picton Harbour area is a hidden jewel and people coming into Picton are not even aware this harbour area is even down here,” Kathryn Cleave said. “With the boardwalk and public parklands available, this will draw people off Main street and is really a no brainer.”

Elyse Cleave spoke about the want and need to develop the Picton Harbour.

“We’ve tried to capture and stay true to the multiple Picton Harbour studies and visioning exercises that have been undertaken. These boardwalks and parklands fit well into those studies,” she added.